INTRODUCTION BY ADINA KUTNICKI: Lost in all the thuggish, criminal mayhem and fiery destruction across many U.S. cities, underlies the absolute fact that many of the top brass within law enforcement are blacks, including police chiefs — for heaven’s sake, Minneapolis’s very own Police Chief, Chief Medaria Arradondo, is black, as are many up and down the chains of command. Sheesh.

Not only that, prosecutorial teams in major U.S. cities are led by blacks and far-left legal eagles, so to speak. So much so, a recent analysis was penned at this site about this very subject, as per its dangerous knock-on effects.

Inexorably, the “anti-law and order” marching orders from within the so-called justice system — egged on by like-minded revolutionary political leaders — couldn’t be any clearer. Indeed, “social justice” has replaced criminal justice. And herein are the real fruits of their (mis)labors — De Blasio, this finger is pointing at you!! Mind you, his wholesale emptying of prisons to “protect” prisoners from corona is of piece with his disdain for law-abiding citizens. Here’s some major blow-back:

“When someone targets a police officer or a police station with an intention to do harm and intimidate — that is an act of domestic terrorism,” Department of Homeland Security Acting Deputy Secretary Ken Cuccinelli https://www.usnews.com/news/us/articles/2020-05-30/federal-officer-killed-in-shooting-at-california-courthouse …

Meanwhile, NYPD, you rock, despite Comrade De Blasio — and this is why…..

The NYPD isn’t having it any longer.

This is how you handle savage terrorists….click on pic to see how it’s done! 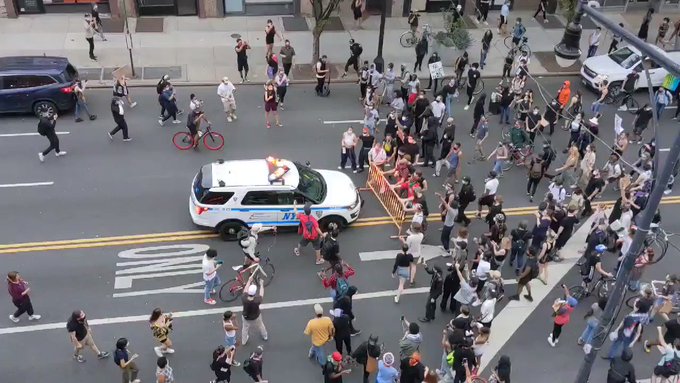 As such, memo to Comrade De Blasio: Yes, for very good reason, the NYPD brass and rank and file detest you for inciting against them, in turn, causing countless cop-killings under your watch! Indeed, hang your head in shame…..stick it in the toilet, while you are at it!

More pointedly, why is it that Minneapolis didn’t burn — mind you, along with well-coordinated {emphasis placed} attacks across other cities — after Muslim Cop Mohamed Noor Shot Justine Damond (on July 15, 2017) point blank in the chest for doing nothing, other than for the “crime” of calling 911 for assistance, concerned that a woman may have been assaulted in an alley behind her house? Moreover, how dangerous was she, as she stood in her pajamas while being shot??

Even so, before we head to the Race-Baiter-in-Chief and the rise of ANTIFA under his watch, ask yourselves: Why is it that Demster-run cities are prone to police violence and riots? Is it just coincidental — or not? You decide.

Now, for eight long, torturous years under HUSSEIN Obama, race relations in America went off the rails. How can this be, even after the most powerful position on the face of the planet was in the hands of the first black POTUS? Huh and duh.

But never mind, all the evidentiary trails re the aforementioned charges of incitement can be found here, if interested. Bear this uppermost in mind, too: The link within had tens of thousands of shares, suddenly, they went down the hidey-hole. Poof-like.

To wit, if anyone thinks the utter, wanton destruction across America really has anything to do with justice for the death of George Floyd (or another black person) by rogue cops gone wild, well, think again.

If anything, this is a direct attack and challenge to law enforcement’s authority: Stop us, “pigs”, if you dare!!

Most significantly, it is hardly accidental that the current burning of Demster-run cities is mirroring a pattern of lethally-charged incitement set by radical, revolutionary leaders, inside and outside officialdom.

More specifically, their end-game can be best understood within Bringing Down America. Naturally, the Race-Baiter-in-Chief is, as always, front and center. Not to be missed, how ironic is it that masks are now ubiquitous clothing accessories, after all, how much easier can it get to hide one’s identity than behind a mask??

Which brings us to the heightened and more than dangerous escalation, as demonstrated below.

By the way, the following analysis is more than noteworthy, for it encapsulates what is really going down and where the upending of America is headed — ensuring that the flames stay lit until the run-up to Nov. 2020, at the very least.]

A man interviewed on camera during last night’s chaos in Minneapolis warned that rioters are planning on “coming to the suburbs” if they don’t get what they want.

The twin cities were once again rocked by a night of absolute bedlam as more stores were looted and rioters set fire to the 3rd police precinct building, prompting cops to flee the scene.

“It’s real bogus, they gotta hit it right, otherwise this is what’s gonna happen, ain’t nothing left here so when we start coming to the suburbs, when we come to the government center, then what y’all gonna do?” the mask-wearing African American asks.

President Trump has promised to bring in the National Guard if local authorities are incapable of handling the violence, something that is pretty much self-evident at this point.

As we highlighted earlier, despite the riots spreading across the country and becoming more violent, the media is still describing the carnage as a legitimate “protest.”

A black business owner who invested his life savings into what is now a looted and destroyed sports bar cried on camera as he lamented, “I don’t know what I’m gonna do.”

A news report describes how the Minneapolis bar owner was attempting to clean up when thugs tried to break in again during filming and loot his safe.

“I don’t know what I’m gonna do, I worked so hard to get here, so hard,” the owner says as he cries.

The clip once again emphasizes how rioters are burning down their own community and destroying the lives of other black people, supposedly in pursuit of justice.

In reality, they’ve trashed their own neighborhood and made it highly unlikely that any new businesses will want to set up shop to serve the community there ever again.

Some business owners placed signs that said “minority owned” in an attempt to deter looters, but that obviously didn’t work for this bar owner.

Conclusively, if all of the above — and what awaits — is not part and parcel of America’s Civil War Rising, what else qualifies? So, the open question is: What will millions of patriots do in response, that is, not if, but when ANTIFA-type terrorists — yes, they are — black, brown, white, or a combination thereof, show up in their ‘hoods, so to speak?

5 thoughts on “The Race-Baiter-in-Chief Fanned The Flames For 8 Years: The Knock-On Effects – ANTIFA Stirs The Pot; Mob-Rule Takes Over U.S. Cities – By Adina Kutnicki”