Like it or not, believe it or not, the unassailable truth is that powerful leftist forces in America have declared war on Christianity (and Judaism). Similarly, this war extends to the wider west —it, too, is under siege.

The aforementioned is not only an affront to millions upon millions of Christians, but to America’s foundational roots. The chilling effect(s) of this ideological-based war is meant to target two heretofore inalienable rights; freedom of speech AND freedom of religion. By now, most rational and non-blinded folks understand that this anti-freedom clamp-down does NOT extend to Islam. In fact, it remains the only protected religion in the heretofore “land of the free and the home of the brave.” The proofs are as manifest as they are manifold. 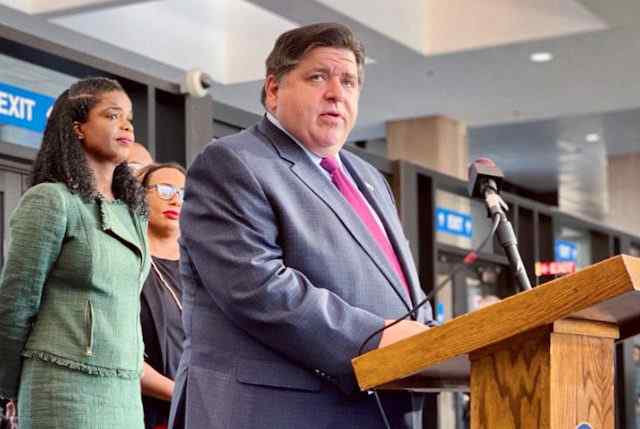 More pointedly, fat-cat Demster Illinois Governor Pritzker put it out there, intoning: Christian Churches may not reopen for a year! Really.

In response to the totalitarian edict of the Guv, there are those who say: Hell no!!

“There is no good reason to prohibit the church from implementing the same social distancing and safety precautions that liquor stores, hardware stores, law firms and accountants are allowed to.”

Not only that, if the above is not placing a bulls-eye on the Christian faith, well, what else needs to be exhibited as a demonstration thereof? Forewarned.

In furtherance to the dangers at hand, more evidence of the same is presented below.

[INTRODUCTION BY ADINA KUTNICKI: Few honest brokers will deny that anti-Christian hatred is on the rise in America, as is anti-Semitism. In fact, so much so that several recent alerts have been blared from this site, namely, here, here, and here. As to Europe, well, it’s been a cesspool for decades. A lost cause. It is not for nothing that the Holocaust originated in its epicenter.

But it is not as if any of this should come as a surprise, shocking as it is. This is the case due to a decades-long onslaught by domestic and foreign forces within the red-green axis — arrayed against the Judeo-Christian underpinnings of the nation’s foundational roots; the pillars of western civilization.

It is this concerted thrust which has turned Christianity (and Judaism) into the enemy, in a hell-bent effort to bring down America.

The fact is that NYC, under the stewardship of Comrade Bill de Blasio, has become like a plague; the epicenter of Jewish and Christian hatred. Mark these words: said knock-on effects will be responsible for destroying what was once a most cultured and glorious U.S. (and worldwide) city into a shadow of itself. Its descent into the abyss, that is, will remain long after the corona virus is but a distant memory!]

Corey Johnson, a Democrat New York City Beruacrat opposed the help when the group arrived upset that Rev. Franklin Graham is a Christian and supports traditional marriage, he wanted them thrown out of the city.

“It is time for Samaritan’s Purse to leave NYC. This group, led by the notoriously bigoted, hate-spewing Franklin Graham, came at a time when our city couldn’t in good conscience turn away any offer of help. That time has passed,” Johnson, who is both openly gay and HIV-positive, according to The New York Times, wrote in the first of his series of attacks on Samaritan’s Purse.

“Their continued presence here is an affront to our values of inclusion, and is painful for all New Yorkers who care deeply about the LGBTQ community,” he wrote.

My statement on Samaritan’s Purse:

It is time for Samaritan’s Purse to leave NYC. This group, led by the notoriously bigoted, hate-spewing Franklin Graham, came at a time when our city couldn’t in good conscience turn away any offer of help. That time has passed.

Their continued presence here is an affront to our values of inclusion, and is painful for all New Yorkers who care deeply about the LGBTQ community.

Johnson is also demanding that Mount Sinai Hospital cease and desist working with the group.

“Mount Sinai must sever its relationship with Samaritan’s Purse,” he wrote.

I’m aware that our battle against COVID-19 is still ongoing, and that our health care system—and the amazing workers who have been the heroes of this unprecedented time in our history—still needs support.

The @NYCCouncil is committed to supporting those workers and protecting our city’s public health. But as a city that values diversity and compassion for all, we can’t continue allowing a group with their track record to remain here when we’re past the point they’re needed.

The field hospital is scheduled to close in a couple of weeks because the pandemic has subsided in the city. Other facilities that popped up in the city have also closed, the USS Comfort left New York, as well as the COVID-19 facility at the Javits Center.

“Since April 1st, this partnership has resulted in high-quality medical care for 315 patients infected with the virus. We are grateful for this opportunity to work together to save lives and reduce suffering,” Samaritan’s Purse and Mount Sinai announced in a joint statement, Gothamist reported. “Now that the surge in COVID hospital admissions is reaching manageable levels, we will stop admitting new patients to the Central Park field hospital as of May 4.”

This is such a perfect example of the Good Samaritan, who helped a Jew that was left for dead even though it violated social norms of the day. Then here is this knucklehead in NYC that wants a hospital gone because it’s run by Christians however, they are still there to help.