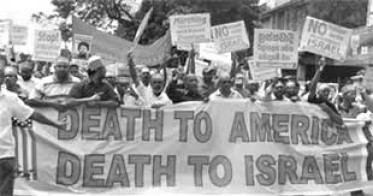 Muhammadans in America — akin to their brothers and sisters worldwide — are not far off from feeling empowered enough to openly broadcast similarly depicted death calls. Incontestably, the very same exhortation to kill Christians and Jews is inculcated in mosques all across America. In fact, hateful, jihadi recitations within the “holy” Koran — considered to be Allah’s dictates, as revealed to “prophet” Muhammad — are recited multiple times a day. As such, they are a major contributory factor to the blackened hearts of followers of Islam. This is indisputable.

Ominously, (whether you) like it or not, (whether you) believe it or not, it is under said truth-telling and dangerous backdrop that Islam is elevated within America — the west in toto, but let’s stick to the heretofore land of the free, the home of the brave. Concomitantly, this western submission comes at the expense of the denigration of Christianity and Judaism, meanwhile, Islam is afforded “protected” status. The proofs are as manifest, as are the reasons. Key and core is the nexus between the red-green axis; the raison d’être of this site.

America’s Civil War Rising (ACWR) educates and warns the public about the growing threat of Islamic sleeper cells in America and the unholy alliance forged between Islamic terrorist front groups and fascist communist factions. This has erupted in a violent ideological clash against those who cherish the values and ideals inherent in American exceptionalism and our Constitutional Republic. Under the guise of “resistance,” the so-called “progressive” left has called for an all-out civil war!

As such, the very fact that Islam is deemed über alles — an inextricable meeting of the minds between anti-American forces, that is, the fascist left and their counterparts, Muhammadans, who are equally totalitarian in nature — lends to countless dangerous knock-on effects, many of which, if not thwarted, will change the pillar of Western Civilization, America, for time immemorial.

In this regard, hold on tight — if not, you may want to spit bullets, so to speak!

Some people have this sickening sense of entitlement that just about defies description when you really sit down and think about it.

Liberals have the idea that they can take anything they want from people and to be honest they are not all that different from another group of people.

See, if you are part of a particular religion and that religion requires you to drink a glass of milk every day at three in the middle of the street that doesn’t mean that everyone else has to do it.

Its because we have one set of laws and they are supposed to apply to everyone.

Yasir Hadh, a prominent American Imam and college professor was described in a 2011 New York Times Magazine essay as “one of the most influential conservative clerics in American Islam.”

Well, he just went on television to warn Christians and jews of what will happen to them if they do not convert.

Hadhi publicly said that Christians and Jews are the “filthy,”“impure,” and basically no different than “feces” and “urine.”

He claimed that “if [Christians and Jews] don’t [convert to Islam,] their life and property are halal [free for the taking] for the Muslims.”

Hadhi publicly said that Christians and Jews are the “filthy,”“impure,” and basically no different than “feces” and “urine.”

He claimed that “if [Christians and Jews] don’t [convert to Islam,] their life and property are halal [free for the taking] for the Muslims.”

Dear reader, “infidels”, you got that? Now, as attested to in today’s intro, Muhammadans — wherever they may reside, yes, their tactics are “situationally” adjusted — will never, ever abide by U.S. man-made laws. In fact, as adherents to Islam, they are forbidden to. Hmm.

Which brings us to the most recent putsch against the nation and its inordinate danger — that which was warned about here in the form of an ACTION ALERT!! Thank heavens it is making headway elsewhere — again, in so far that this “innocent” call to prayer includes verses which raise Islam/Muslims above all others, and, at the same time, denigrate Christians and Jews in the process! How’s that for the “American way”, as well as the notion that multicultural ethos is of “supreme” import??

In furtherance of said incendiary prayers that are now deemed part of the American fabric — yes, the Islamic horses have escaped the barn — and broadcast from the rooftops, well, the reader is referred here.

A Minneapolis neighborhood, which lies in controversial Democratic Rep. Ilhan Omar’s district, will begin broadcasting the Muslim call to prayer five times a day over outdoor loudspeakers throughout the month of Ramadan, reports say.

The simple, short call – known as the adhan – marked an historical moment for Minneapolis and major cities across the United States, community members said. While the adhan is commonly broadcast throughout the Middle East, North Africa and other places, for many Muslims in the US, it is only heard inside mosques or community centres.

“There’s definitely a lot of excitement,” said Imam Abdisalam Adam, who is on the board of the Dar al-Hijrah mosque, from where the adhan will be broadcast.

“Some people see it as historic,” Adam told Al Jazeera. “To the point … that they’re not doing it, able to see it in their lifetime.”

The city granted a noise permit for the prayer.

“Tonight’s historic call to prayer in Minneapolis will bring comfort and remind the faithful and the neighborhood that as we are physically distant we can still be connected to our faith and mosque,”  Council on American-Islamic Relations (CAIR-MN) Executive Director Jaylani Hussein said in a statement.

Incontestably, the aforementioned names have EVERY reason to be giddy and pumped to the max — each and every one, without exception, is associated with the Muslim Brotherhood Mafia! Imagine that.

Most significantly, it is not lost on the Islamic community in America – globally, too – that they are one step closer to conquering/submitting the epicenter of western civilization! More pleasurable than infinite wet dreams…..

Indeed, their ultimate goal, that is, global domination, is coming to fruition— much sooner than later!

2 thoughts on “U.S. Imam: ‘Islamists Have The RIGHT To Take The Property Of Christians And Jews’ + Muslim Call To Prayer BROADCASTED In Major US City – The Nexus”