While militant jihad is exploding throughout the world, westerners are both transfixed and terrified by an enemy whose blood lust is unquenchable – seeking nothing less than the total annihilation of western civilization. A scorched earth.

Nancy Hartevelt Kobrin, Ph.D., a world-class expert on the psychoanalytical aspects of suicide terrorism and early childhood development, is the author of several books on this very complex, highly frightening, and, for the most part, unknown phenomena. The Jihadi Dictionary: The Essential Intel Tool for Military, Law Enforcement, Government and the Concerned Public is her most recent exploration into the psychological mindset and dark recesses of the ‘black hearts’ of Jihadi terrorists.

By meticulously identifying the core building blocks which are necessary for healthy mother-child bonding, Dr. Kobrin traces the inability of Muslim women to bond with their children to deep-seated cultural ‘norms’ which are endemic within the Muslim world. In turn, their offspring become profoundly scarred during the most primary and intrinsic developmental stages. This is the case for both sexes. By extrapolation, a vicious psycho drama dominates the psyche of countless Muslims across the world – petrifyingly so.

Throughout, Dr. Kobrin expounds upon the primacy of the broken maternal cord, and its essence is succinctly encapsulated on page 258.

“The jihadi is always trying to sever this tie with the mother’s body. The link or
cord surfaces in much of the group’s bloody imagery, just like birth and the afterbirth.
However, the jihadi is stuck in a twilight zone of no separation. The image of the
umbilical cord appears as a wick that was ignited by a jihadi of the Islamic State,
immolating the Jordanian pilot Muath Safi Al Kassabeh, who had been placed in a
cage. The jihadi terrorists lit a very long umbilicus-like cord to set the pilot on fire,
roasting him to death. This mental image reflects the contents’ of the Islamic State’s
psychotic, enacted fantasy. The cage symbolized the womb of the mother, but even
this symbolic representation of the womb is unsafe for the jihadis. In their primitive mental state, the cage and wick are the misuse of the object, and the tragic, brutal death of Al Kassabeh is the misuse of a person.”

Similarly, within the book’s Conclusion (page 270), a bird’s-eye view into Islamic pathology – as it relates to Jihad in general, and suicide terrorism in particular – is exposed.

“This dictionary aims to take the discussion to the earliest level of development,
which I believe is the missing piece in the thousand-piece puzzle of Islamic terrorism.
In order to break the code of terrorism and strip it bare, we must deal with its root
problem ― the devalued female in shame–honor cultures and shame–honor religion
and political extremist movements. Once stripped down, terrorists are faced with their
naked, vulnerable, fragile selves ― in this case the maternal drama.”

In this reviewer’s opinion, the main value of The Jihadi Dictionary lies within its unique ability to merge the confused psycho-sexual components and dynamics of Jihadi terrorism, with a growing compendium of works which delve into the life and history of the Koran’s author, Muhammad.

The Jihadi Dictionary serves as an invaluable explanatory companion to an emerging work of essays and books, namely, Islam and Blood: America’s Deadliest Enemy by Professor Paul Eidelberg, and It’s All About Muhammad; Was Muhammad Insane? by F.W. Burleigh. By examining the fundamentals of Sharia Law – Islam’s violent underpinning and wellspring – coupled with the pathology of ‘prophet’ Muhammad, unarguably, a madman, a toxic brew is always in the mix.

The dictionary format is a particularly useful Intel tool for military, law enforcement and government professionals. It allows for quick referencing and cross-referencing; a one of a kind resource guide for practical application. Moreover, its basis can be utilized for immediate, intermediate and long-range strategic planning.

More specifically, many of the aforementioned professionals – and the public alike – are in desperate need of ‘remedial’ education, regarding a lethal enemy which is fighting a 7th-century (mindset) war with the most advanced technology known to man.

Most significantly, The Jihadi Dictionary acts as a desperately needed non-PC windowed mirror into the motivational forces behind Jihadi terrorism. By unveiling the driving and underlying cornerstone of its psycho-sexual roots, Nancy Hartevelt Kobrin, Ph.D. should be congratulated for her distinctive and courageous contribution to the most pressing issue of our time, Jihadi terrorism.

The Jihadi Dictionary is must reading for all westerners. 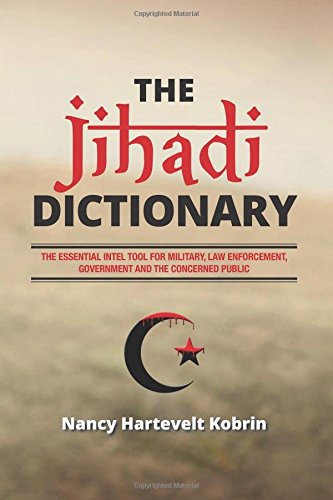 4 thoughts on “The Jihadi Dictionary: The Essential Intel Tool for Military, Law Enforcement, Government and the Concerned Public (By Dr. Kobrin): A Review”