A main barometer to a nation’s health, at a minimum, is when the leadership is capable, willing, to identify the enemy. On the flip side, what are patriots to conclude when identifying said enemy is absolutely verboten? Crazy is as crazy does.

AND for those who believe that the above charge sheet is borne out of hysterical rantings, the fact remains that it is precisely on target. Mind you, western jive-talkers and spin-doctors find every excuse imaginable NOT to link Islam + terror, but it is getting harder and harder to swallow their bald-faced lies. Shameless and undisguised; barefaced.

SO much so, the last eight years under HUSSEIN Obama are a study in cognitive dissonance and a facsimile of his ideological ilk. Regardless, countless are stepping aboard the truth-telling train, and counter-jihadists are working overtime to ensure its success.

Tuesday, September 2, the Islamist butchers of ISIS beheaded Steven Sotloff, a captured American journalist. Sotloff, who was kidnapped last year in Syria, was forced to read a statement condemning America, and then his throat was slowly cut with a hunting knife until his head was removed from his body. Of course, apologists for Islam will shout to the heavens that ISIS does not represent Islam, but it is becoming harder.

The viewpoint of ISIS echos throughout the Islamic world. Mawlana Abul Ala Mawdudi, founder of Pakistan’s Islamic Fundamentalist Movement, which boasts hundreds of thousands of members, spoke openly and honestly about the religion of Islam.

“Islam is a revolutionary faith that comes to destroy any government made by man. Islam doesn’t look for a nation to be in better condition than another nation. Islam doesn’t care about the land or who own the land. The goal of Islam is to rule the entire world and submit all of mankind to the faith of Islam. Any nation or power in this world that tries to get in the way of that goal, Islam will fight and destroy.”

While we can always agree to disagree on religious interpretation, Obama has a history of deliberately distorting or misrepresenting the Qur’an, and he lied to the world with his ‘Islam Is The Religion Of Peace” comments after the Boston Marathon bombings. David Wood produced an absolutely outstanding video on Obama’s post-bombing comments and made of a mockery of the President’s dishonest speech about “Peaceful Islam.” Every single American needs to watch this video and find out for themselves about the never ending program of Islamic deception that goes all the way to the Oval Office of Barack Hussein Obama.

To further illuminate the difficult subjects we are discussing, we asked Israeli journalist Adina Kutnicki and American investigator and security specialist David Gaubatz to weigh in on the threat from ISIS and the expanding Islamist army…..continue reading…

NOW with enough facts at ones fingertips, isn’t it “understandable” why churches are burning; why Jews are slaughtered non-stop; why Allah’s Muslim terrorists commit rape-jihad on a continuous basis, plus so much more?

EVEN so, none of this stops HUSSEIN – nor countless anti-American surrogates – from protecting Islam’s soldiers for Allah, as they burn down the underpinnings of western civilization! Now, what does THAT tell you? Precisely.

But, but but…The events of the night were described as “quiet” by German police in a statement, and as “normal” by a spokesman for the city government.

At New Year’s Eve celebrations in Dortmund a mob of more than 1,000 Muslim men chanted ‘Allahu Akhbar’, launched fireworks at police, and set fire to a historic church.

Already by 7 pm a man was hospitalized with first-degree burns to his face and hands after fireworks were hurled at a group of homeless people outside the city’s main train station. More than two dozen people were injured at festivities in Dortmund, some seriously.

At midnight, the situation threatened to escalate. A livewire published by the Ruhr Nachrichten reported that a crowd of “at least 1,000 young men” began throwing fireworks into crowds of visitors, which also included families with children. Asked by officers to stop, the mob turned to pelt fireworks at police instead.

Despite the prohibition of lighting pyrotechnics near churches, firemen had to intervene after fireworks were launched at St Reinolds, Germany’s oldest church, setting the roof alight.

Also reported by the Ruhr Nachrichten was that “a group of Syrians sang in celebration of the ceasefire in Syria.” However, a video posted to Twitter by one of the newspaper’s reporters, paired with the caption “Syrians celebrate the truce in their country”, shows a group of men chanting ‘Allahu Akhbar’ around the flag of al-Qaeda and Islamic State collaborators, the ‘Free Syrian Army’. 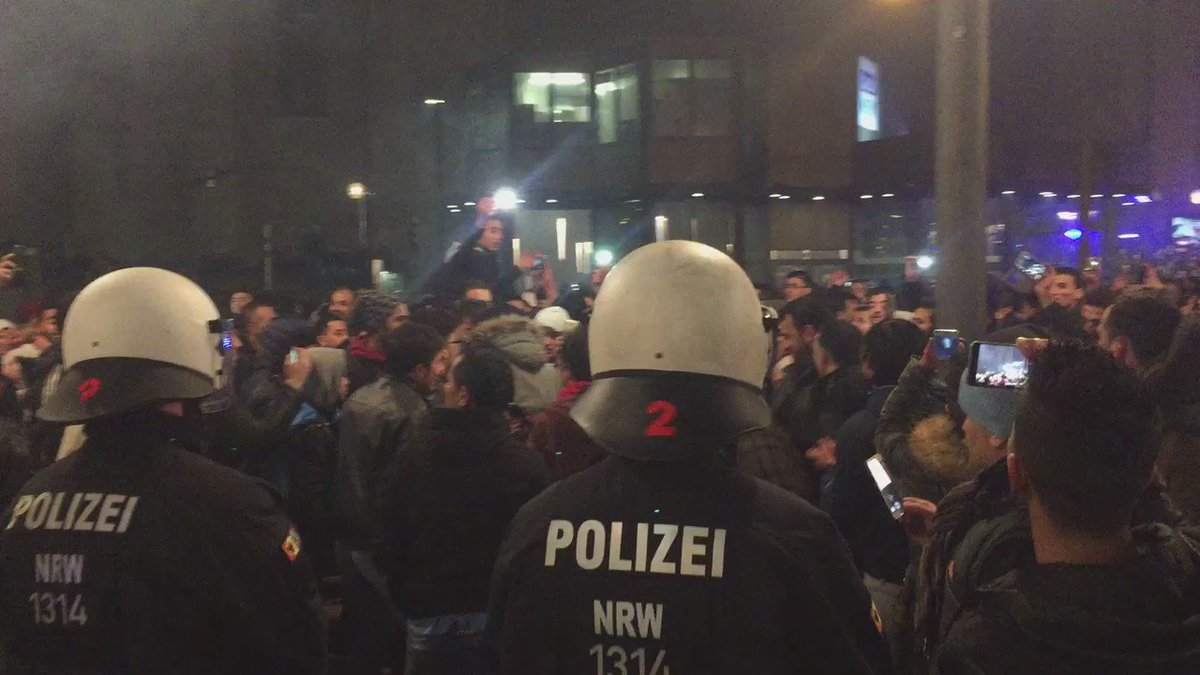 STILL yet, if you thought Islam’s barbarians couldn’t get any more dangerous, twisted, you would be wrong!

MORE specifically, this site’s readers are familiar with rape-jihad via several featured commentaries, and they can be found within these pages. And while civilized westerners are duly aware of the special consideration given to people with challenges, not so with Islam’s barbarians!

A refugee newly arrived from Somalia has been tried and convicted for attempting to sexually assault a special-needs woman while she was sitting outside of a home for the disabled in Aberdeen, South Dakota.

Liban Mohamed, 39, was in the United States for only about a week when he tried to force himself on a 31-year-old woman with severe disabilities. He is not a U.S. citizen, but whether he will be deported in the wake of his conviction remains unclear.

The trial for Mohamed was held just a few days before Christmas and not a word of the conviction has made it into the local media, residents of Aberdeen told WND on Tuesday.

Mohamed speaks no English and required two interpreters at trial, according to the state’s attorney who prosecuted the case.

“I do know he lived in Aberdeen,” prosecutor Christopher White told WND. “The day that it happened, he was staying at the White House Inn hotel in Aberdeen. What came out at trial, in his defense attorney’s opening statement, was that he arrived in Aberdeen that day and had only been in the United States for approximately a week, and he had come to work at the beef plant in Aberdeen. But I don’t know if he had already started working or was about to start work there.”

Mohamed mentioned to law enforcement that he had been hired on at the Demkota Ranch beef plant, White said.

WND called the executive editor of Aberdeen’s daily newspaper, the American News, and asked why nothing has been reported on the crime committed by Mohamed. He said he had no knowledge of Mohamed’s arrest, trial or conviction.

“I’m not seeing it in our system, and I really don’t recall it,” said editor J.J. Perry when asked about the case Tuesday by WND. “I’ll have to talk to our court reporter. It might be we just missed it on the docket.”

The newspaper’s court reporter, Elisa Sand, did not attend the trial, WND was told by officials who were present on Dec. 20.

Nor has the case received any coverage from local TV stations in South Dakota or neighboring Minnesota.

Mohamed was convicted of attempted sexual contact with a person incapable of consent, which is a class 4 felony in South Dakota and punishable by up to five years in prison. The victim is a mentally impaired woman living at a facility operated by a local nonprofit, Aspire Inc. She is unable to fully communicate, said White.

Two police officers and a woman employed with Aspire testified against Mohamed at trial, according to court records.

Civilization jihad calls for changing a nation by changing its people and its values—gradually, over time. Stealth Invasion blows the lid off a corrupt, fraudulent program that has been secretly dumping Third World refugees, many of them radical, on American cities for three decades. Americans have been kept largely in the dark about the radical plans to permanently transform their nation. Until now.
http://imasdk.googleapis.com/js/core/bridge3.153.3_en.html#goog_1622131863

What else happened? continue reading….

SO is it any wonder that Geert Wilders (back in 2012) had this to say on BBC’s Hardtalk, you know, the typical “news” show which defends the indefensible and tolerates the intolerable? Rhetorical.

BUT never mind, there’s more. Now, while nowhere near – as of yet – the burning physical wreckage throughout the Mid East and wherever Islamdom rules, the fact remains that continuous incitement via denigration from power-brokers throughout America – as they wage a non-stop campaign to delegitimize Christianity for the benefit of hedonistic secularists – will lead to an eventual, inevitable, powder keg. Insidious. Indubitable. At the same time, Islam is protected at all costs, and from all fronts.

According to a new report from International Christian Concern, for the first time the United States has been placed on the “Wall of Shame” for countries to watch for Christian persecution. While noting that what Christians experience in the USA in not at all what Christian in countries like Iraq or Nigeria experience, the report notes the fact that Christianity is being publicly marginalized by an increasingly hateful, militant secularism that is encoding their open disdain into law in the United States:

In short, Christians in the US are facing constant attacks in the media, where they are portrayed as bigoted, racist, sexist, and closeminded. The characterization in the media may be translating into direct attacks as well. The First Liberty Institute, the largest legal organization in the US dedicated exclusively to protecting religious freedom, documents such actions and reports that attacks on religion doubled between 2012 and 2015. More importantly, Christians and all religious people are being marginalized through the law…..continue reading…..

NEVERTHELESS, the truth is FINALLY burning to the forefront. Again, Americans, WATCH OUT!