IT is often the case that when one waits too long to drain a dangerous swamp, one ends up being bitten. Big time. Or, at the very least, one will feel an overwhelming sense of suffocation from its wretched stench. It is just the way nature intended it to be, that is, if one is neglectful and negligent in carrying out necessary tasks.

TRAGICALLY, the failure to recognize when to let go of any abusive relationship has far reaching, often deadly, consequences, even if blinded by them at the time. Besides, wishing doesn’t make it so. Yes, akin to too many poisonous relationships, you know, when one spouse repeatedly gets beaten, only to forgive the offender (again and again), the victim returns to an even far worse situation. Not only that, some refuse to learn their lessons, as they jump into bed with one abusive partner after another! Not to mention, countless end up dead due to their blinded eyes and failure to leave, while they still had an opportunity to escape. How can this be? Gluttons for punishment, or so it would seem.

WHILE seguing from a stink-filled swamp to an equally dangerous abusive domestic relationship may appear unrelated, the underlying premise remains the same. To wit, isn’t it way past time for millions upon millions of hard-working taxpayers to assert their own actionable demands, inquiring: after so many years of anti-American (anti-western) abusive behavior, why exactly have American leaders continued to fund 22% of the budget – let alone one red cent – of a massive kleptocracy? Indeed.

American taxpayers will pony up around $3.024 billion this year towards the United Nations’ regular and peacekeeping budgets, more than what 185 other countries combined are paying, an expert on the international body told U.S. lawmakers on Wednesday.

While the U.S. contribution in 2015 to the U.N. regular budget is $621.9 million, the 35 countries contributing the least will pay just $28,269 each, Heritage Foundation scholar Brett Schaefer told the Senate Foreign Relations subcommittee responsible for multilateral institutions.

And where the U.S. will pay $2.402 billion towards the separate peacekeeping budget, the 20 countries contributing the least will pay just $8,470 each.

Putting those together, “the United States will be assessed approximately $3 billion this year, based on the projected budgets for the regular and peacekeeping budgets, while the 20 least-assessed countries will be assessed less than $37,000 [each] this year for both of those budgets,” he said.

AS to American leaders, elected and non-elected elitists (hey, Soros, this investigative journalist and author is pointing the finger at you!) who view the U.N. as the main venue, address, to implement their long-held vision of a One World Government, well, dealing with thuggish kleptocrats is a small price to pay.

EVEN so, as bad as it appears, in reality, it is much worse. The blueprints are found within U.N. Agenda 2030. Still yet, as always, when evil permeates an entire institution – a world body, no less – there is always a MAJOR tipping point. This time is no different.

IN this regard, the following bullet points must be clearly understood for what they are, they are THAT intrinsic to America’s survival. Simple as that.

MOVING right along its rancid halls of power, let’s wend back to how they treat the only beacon of light in the darkened, barbaric, Islamic Middle East and catch a glimpse as to what awaits, if a volte face isn’t executed forthwith. Righteous blow back.

NOW whether or not one is pro Israel, a blind person can see that vile animus toward the only democracy in the Middle East, the sole Jewish State too, is a recipe for disaster. This is where blow back comes in.

MORE specifically, in political science there exists a huge volume of evidence pointing to the out-sized ramifications from blow back. And while this is not the time and place for a political science lesson, the link within is highly instructive, in so far as little is more self-evident than knock-on effects from Merkel’s and HUSSEIN’s bloody blow back, as they flood the west with “refugees” from jihadi-riven nations!

MOST significantly, it remains to be seen if President-elect Trump – in concert with Senator ‘s Graham and Cruz in the lead – rises to the occasion and defunds the cesspool polluting 405 East 42nd Street in the heart of mid-Manhattan, as promised. Not only that, it gives true American leaders, patriots, the last chance to make America great again! 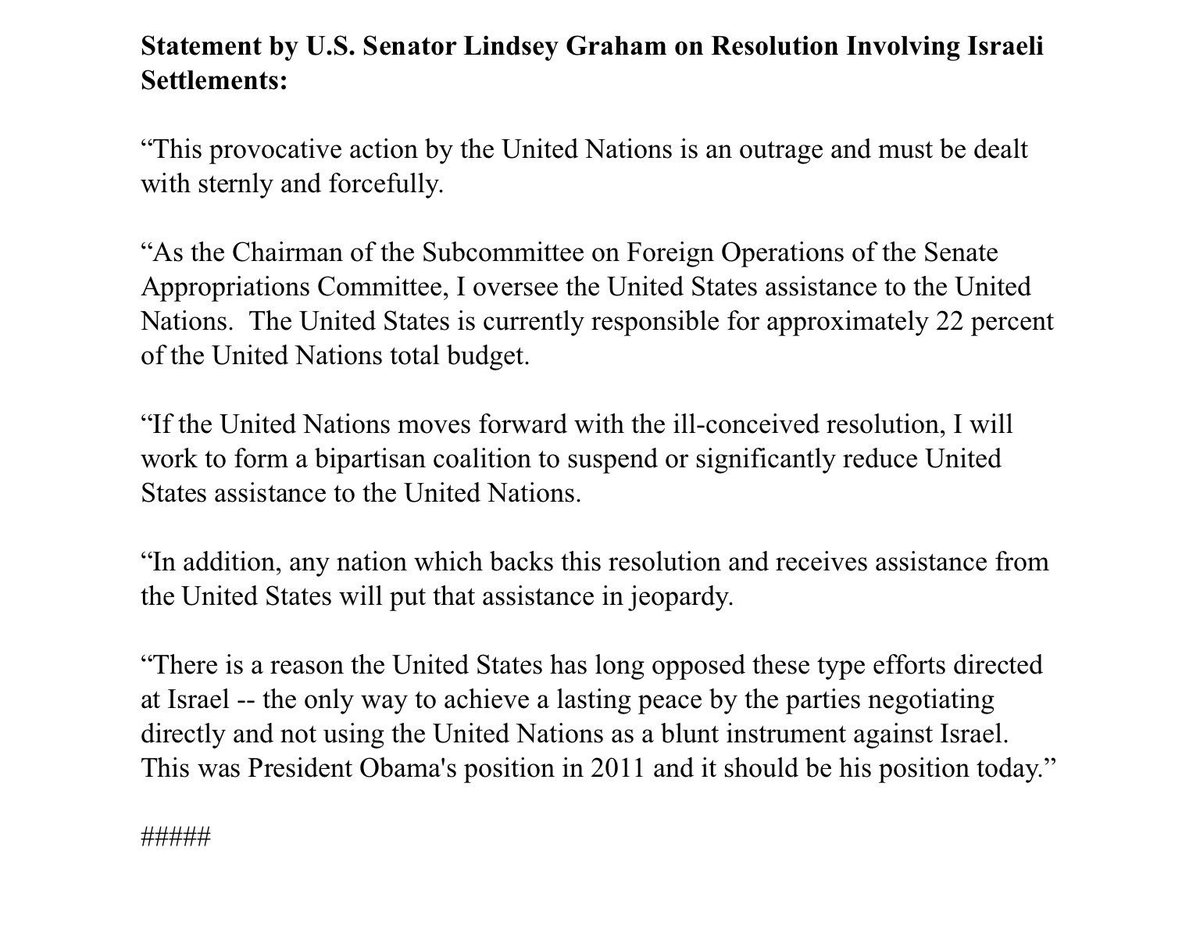 INHERENTLY, as it stands, this is a rare moment in historical time when the return to national pride is very high. In other words, an increasingly fed up and restless western electorate has no appetite to please crooked bureaucrats, be they housed at EU headquarters or the U.N. – six of one, half a dozen of another. Extrapolating further, President-elect Trump, as the leader of the free world, has a golden window of opportunity to extricate America from the U.N.’s vise-grip. And the fact that the worst human rights violators on the global stage hold sway at its headquarters, many of whom are leaders of Islamic jihadi hell-holes, there is little doubt that if America says bye-bye that other democratic leaning nations will follow suit.
IF not, rest assured, the brazen anti-Israel putsch taken by HUSSEIN and his gangster-like surrogates – alongside thuggish regimes and others who have lost their moral footing – will pale in comparison with the U.N.’s next moves.
IT goes without saying – at least it should – that once resident bullies fully comprehend that there is NO ONE who will stand up to them and exert MASSIVE retaliatory push-back, what else should be expected but more of the same – and worse?
TEAR it done! Send them packing, preferably, to the worst hell-hole among the so-called international body of nations!!

8 thoughts on “When Is It (Past) Time To BANISH The World’s Largest Kleptocracy From America’s Shores?The U.N., An Anti-Western Cancer! Commentary By Adina Kutnicki”