FROM the inception of this site, the core mission within has been consistent and immutable. Set in stone. Non-wavering.

And even though this blogger is known, on occasion, to be stubborn – some might suggest, mule-like – there is something to be said for sticking to one’s guns. In any case, why should Islamists be the only ones to hold steadfast to their goals, however barbaric they are? Besides, isn’t it high time that those of us who possess the requisite knowledge base, plus a megaphone, share what we know with others? After all, what use is delving into the underbelly of the Muslim Brotherhood Mafia in specific, and Islamic jihad in general, if unwilling to share with others? Fear should never be one’s modus operandi, nor excuse to turn tail, though caution is preferable to recklessness.

That being noted, a plethora of evidence has been amassed at this site, pointing in one general direction: yes, Islamic barbarism is a global scourge, if not tamped down it will engulf the entire free world. No one is suggesting it will happen tomorrow, but there is every possibly that freedom’s lynch pins will unravel within the next decade. The markers towards a cruel end to western liberty are so clear it will be impossible to hide them from one’s children and future generations to come. In effect, this current generation of adults (anyone of majority age) will become most well known for their cowardice and unwillingness to preserve basic freedoms, those which others before them sacrificed their lives for. Shameful.

IF one really wants to know what’s what, look no further than to those who lived under Shariah law’s boot, yet managed to escape with their lives intact. Many millions were not so fortunate, they lie six feet under. Countless others couldn’t even have proper burials, their body parts were blown to smithereens. Yes, this IS life – and death – under Islam.

Part I. What Muslims and Arabs Say About Islam

Is Aryan Hirsi Ali a racist? She was born in Somalia, from which she escaped to avoid an arranged marriage, and she eventually became a Member of Parliament in the Netherlands. She helped produce a film with Theo Van Gogh which criticized Islam’s treatment of women. Van Gogh was shot to death by a Muslim in retaliation, and a note was pinned to his chest with a knife — a note that threatened Ayaan Hirsi Ali. She made her way to the United States, and has since written two books critical of Islam: Infidel and Nomad: From Islam to America: A Personal Journey Through the Clash of Civilizations. 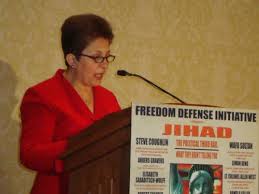 Is Wafa Sultan a racist? She was born and raised in Syria, and was trained as a psychiatrist. On February 21, 2006, she took part in an Al Jazeera discussion program, arguing with the hosts about Samuel P. Huntington’s Clash of Civilizations theory. A six-minute composite video of her response was widely circulated on blogs and through email. The New York Times estimated it was seen at least one million times. In the video she criticized Muslims for treating non-Muslims differently, and for not recognizing the accomplishments of Jews and other non-Muslims. The video was the most-discussed video of all time with over 260,000 comments on YouTube. 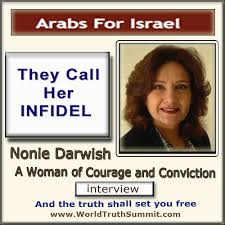 Is Nonie Darwish a racist? Now an American, she grew up a Muslim in Egypt, the daughter of an Egyptian general whose family was part of President Nasser’s inner circle. Darwish founded Former Muslims United with Ibn Warraq, an organization dedicated, in part, to helping Muslims reject the inherent intolerance, violence, and supremacism in their doctrine. Darwish is the author of two books critical of Islam, Cruel and Usual Punishment: The Terrifying Global Implications of Islamic Law, and Now They Call Me Infidel: Why I Renounced Jihad for America, Israel, and the War on Terror. And she is an outspoken critic of Sharia law.

The list of apostates from Islam, having escaped in one piece, can be viewed within; humbled and grateful for having been asked to participate in its groundbreaking scholarship. Thank you, Prof Paul Eidelberg, for placing your faith in said assistance.

In this regard, the following Pastor emits his own clarion call, chiefly within warning shot of America, the heretofore leading nation of the free world. Just (mentally) add his name to the list  (of more well known escapees from Islam – yes, they ARE escapees), but do not become repulsed by his physical appearance. It is NOT the time to look away!

Pastor Umar Mulinde was born in Uganda to a Muslim family with his father being an area-Muslim leader. But after Mulinde converted to Christianity he was attacked for his new faith. Mulinde went on record to tell his story and issue a warning to America.

Because he was raised as a Muslim Mulinde says, “I know whatever a good Muslim and a true Muslim… and a leader in Islam must know.” But once he converted to Christianity, he was hated by the Muslims in his community.

Mulinde was called out one night by a voice in the darkness. “Pastor,” the man called. As Mulinde turned to respond to the voice, half of his face was covered in acid by the man in the dark. In an effort to escape, Mulinde turned and ran for help. Half of his face and part of the back of his head was badly burned by the acid. But despite this, Mulinde still has hope.

A tearful moment happens at 4 minutes when he says, “I realized, I had fallen in the hands of my enemies… It’s not because of this [pointing to his scarred face] that I am crying. It’s because of doing something right and then you’re paid something wrong.”

When asked why he wasn’t dead when he should be, Mulinde responds, “God is mighty.”

He then turned to deliver a powerful word to America.

“God Almighty has given you the grace. Whatever you do in America influences everyone in the world. You have that grace. One thing that Islam is doing to defeat you is causing you to be coward and fearful to stand up and speak against the invasion of the Islamization that is going on in your country. Stand up before it’s late. …If you get [sic] afraid today, within time, you will find your children and your grandchildren being Muslims and torturing other people. Stand up now and defeat the challenge of the global Islamization agenda.”

Now, for those who tune out any religious overtones, be they Jewish, Christian or what not, never mind. The fact of the matter is that cowardice – whatever ones spiritual or atheist perspective – is a (silent) killer. It is one which jihadists not only count on, but which gun control freaks (leftists and cohorts) exploit. In other words, what better way to exert TOTAL control, then through disarming the public, causing them to become absolute captives? And can anyone dare imagine the lightening speed which Islamists and their leftist counterparts would utilize to overcome the (patriotic) American public, if, heaven forfend, disarmed? Breakneck.

Yet, it is entirely understandable that westerners feel hopeless, boxed in, by the jihadist’s immutable fervor, Islamic warriors that they are. Alas, if additional rallying cries are required to lift your spirits – and stoking oneself mentally is imperative – as well as to move you to action, think of yourselves like titanium (this blogger does), a substance most of us studied via basic chemistry classes, when laboring over the periodic table.

As such, revel in this site’s uplifting gift to you….among countless others….