TRAGICALLY, westerners are woefully unfamiliar with the poisonous underbelly of Islamic culture, let alone have zero knowledge base of its blood-laced Koranic strictures. Resultant, most are in a hyper state of suspended disbelief at the stepped-up carnage perpetrated under the banner of the so-called “religion of peace.” Understood. Thus, this investigative journalist is on a mission to change the calculus.

And so much more….

HOWEVER, despite the painful reality of our times, it is wildly dangerous to ignore the centuries-long arc of Islamic conquest via its bloody crusades, as it DIRECTLY impinges upon the carnage sweeping across the globe.

AS such, westerners must view centuries-past historical events under the same prism as Allah’s Muslim Terrorists, in that they are completely steeped in it as if it happened yesterday!! Alas, starting in 630, two years before (moon-god) pagan Muhammad’s death when he launched the Tabuk Crusades until 1095 when Pope Urban II preached the first Crusade and captured Jerusalem in 1099, they continued their brutal conquest well into the seventeenth century until western resistance intensified. Most notably, the Islamic Ottoman Empire lasted from 1299-1923! Talk about staying power….

IT bears repeating: Even though westerners have very short historical memories, the same cannot be said of Islam’s barbarians, in so far as the same driving force which drove them centuries ago is still driving them – the Islamic Caliphate!!

The Organization of the Islamic Conference is the closest thing in the modern world to a caliphate. It is composed of 57 members (56 sovereign states and the Palestinian Authority), joining voices and political heft to pursue the unitary interests of the ummah, the world’s 1.4 billion Muslims. Not surprisingly, the OIC works cooperatively with the Muslim Brotherhood, the world’s most extensive and important Islamist organization, and one that sees itself as the vanguard of a vast, grass-roots movement — what the Brotherhood itself calls a “civilizational” movement.

Muslims are taught to think of themselves as a community, a single Muslim Nation. “I say let this land burn. I say let this land go up in smoke,” Ayatollah Ruhollah Khomeini famously said of his own country in 1980, even as he consolidated his power there, even as he made Iran the point of his revolutionary spear. “We do not worship Iran, we worship Allah.” Muslims were not interested in maintaining the Westphalian system of nation states. According to Khomeini, who was then regarded by East and West as Islam’s most consequential voice, any country, including his own, could be sacrificed in service of the doctrinal imperative that “Islam emerges triumphant in the rest of the world.”

Because of that doctrinal imperative, the caliphate retains its powerful allure for believers. Nevertheless, though Islamists are on the march, it has somehow become fashionable to denigrate the notion that the global Islamic caliphate endures as a mainstream Islamic goal.

It was only a week ago that close to 2 million Muslims jammed Tahrir Square to celebrate the triumphant return to Egypt of Sheikh Yusuf Qaradawi, a Khomeini-esque firebrand who pulls no punches about Islam’s goal to “conquer America” and “conquer Europe.” Yet, to take these threats seriously is now to be dismissed as a fringe lunatic, a Luddite too benighted to grasp that American principles reflect universally held truths — truths to which the ummah, deep down, is (so we are told) every bit as committed as we are.

The caliphate is an institution of imperial Islamic rule under sharia, Muslim law. Not content with empire, Islam anticipates global hegemony. Indeed, mainstream Islamic ideology declares that such hegemony is inevitable, holding to that belief every bit as sincerely as the End of History crowd holds to its conviction that its values are everyone’s values (and the Muslims are only slightly less willing to brook dissent). For Muslims, the failure of Allah’s creation to submit to the system He has prescribed is a blasphemy that cannot stand.

The caliphate is an ideal now, much like the competing ideal of a freedom said to be the yearning of every human heart. Unlike the latter ideal, the caliphate had, for centuries, a concrete existence. It was formally dissolved in 1924, a signal step in Kemal Atatürk’s purge of Islam from public life in Turkey. Atatürk, too, thought he had an early line on the End of History. One wonders what he’d make of Erdogan’s rising Islamist Turkey.

What really dissolved the Ottoman caliphate was not anything so contemporary as a “freedom agenda,” or a “battle for hearts and minds.” It was one of those quaint military wars, waged under the evidently outdated notion that Islamic enemies were not friends waiting to happen — that they had to be defeated, since they were not apt to be persuaded.

BUT along said quest for the supranational Caliphate underlies a host of mega forces, one of which is hyper-sexual in nature. No kidding. In fact, this cultural “norm” has been explained at several commentaries and featured at a major policy paper by linking its inextricable relationship to blood. Still yet, very few (even supposed scholars of Islam) understand its essence and its driving force behind the fatwa of rape-jihad and its piggyback to Islamic culture.

FUNDAMENTALLY – for added context re the shielding of sexual crimes under Islamic Law – the western world must internalize how women are really viewed within the Islamic world, in order to understand why children (females and males alike) are treated as little more than objects for sexual releases. Cause and effect.

SO aside from what is already self evident how about this: Indeed, women’s existence is against Islam, so sayeth the council of Islamic ideology! Really.

YET, if the above is more than a rational mind can bear, sorry, we are just getting warmed up. Yes, this too must be recognized to understand the catastrophic dangers facing the west, as Islam encroaches within its borders: An Islamic fatwa “koshers” the sale of kiddies and wives!

NOT only that, aside from the sexually gratifying component (free of guilt from the prohibition of pre-marital sex), countless jihadi women are completely ready to bed AND roar, all for the sake of satiating their monstrous Allah! Monstrous Islam.

STILL, despite the absolute Koranic dictates to kill all infidels – including Muslims deemed apostates – the fact of the matter is that there are sexual roots endemic in “jihad by sex.” In other words, Muslim women, while valued as chattel, are starting to roar, not away from their suppressors but towards jihad! Go figure.

SAY whaaat? Well, jihad is inextricably linked to repressed sexual rage within the Islamic male psyche, thus, defining their relationship to women. And this is not psycho babble. Simply put, Islamic women are getting with the program.

RESULTANT, in light of the above, it makes entire “sense” for “sex by jihad” to become the new rage!

Muslim Terrorists In Iraq (ISIS) Issued A Decree Ordering All Families To Send Their Unmarried Women To Participate in “JIHAD BY SEX”!

AND intertwined into this Islamic madness, we still need to deal with Islam’s absolute support of pedophilia, as it links back to the Madonna-Whore Complex. This is irrespective of said sexual diagnosis within non-Muslim males.

DEAR readers, clearly all this info is mind-boggling and beyond the pale. However, it is time to pay rapt heed, that is, if there still is a willingness to push-back against Islam, particularly against the endemic raping of western women and children across the globe!

AS is known, knowledge is power, but it also fuels the fighting spirit required to destroy the barbarians already amassing inside western gates!!

IN this regard, as Islamic fueled rapes continuously explode across Europe, it is inordinately imperative to look at the gravity of the global clash between civilizations without any qualms. And if one report should be considered Exhibit One for the Islamic fuel which fires up their rampaging rapes, look no further:

An Algerian Muslim man who almost killed his 25-year-old student victim shouted out ‘if Allah wills it’ in Arabic as he raped her in a darkened alley, a court has heard. The man, identified only by his first name Rheda, is accused of following the student as she walked home from a nightclub in Hannover, Germany.

UK Daily Mail  Afterwards, with his victim badly beaten, he is alleged to have climbed off her and asked her if she enjoyed it. The shocking details were revealed at the trial of the 37-year-old asylum seeker from Algeria who has denied rape. Prosecutors say DNA evidence links him to the crime.

The young woman, identified only by her first name Lara, said it was the worst moment of her life when she was attacked. She said: ‘He asked me in broken German if I had [the] time. Before I could reply he then grabbed me by the arm and pulled me down an alleyway.

‘He told me “I need sex”. I opened my mouth to scream but he put his hand over my mouth. I had a pepper spray, and I tried to spray it at him but he grabbed it off me, and used it on me instead.

‘Then he threw me onto the ground, and tried to pull off my trousers but he couldn’t do it. Then he started screaming at me to get undressed.’ She told the court she had tried to win time by begging him to leave her alone and hoped that someone would come past.

Nobody did, and when she tried to scream again he started beating her in the face and he sprayed the pepper spray on her face again. He had banged her head on the ground repeatedly until she was almost unconscious, and she thought she was going to die. 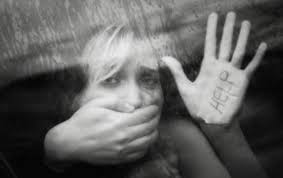 She said: ‘He put his hand over my mouth and closed my nose, and I thought I was going to suffocate. I then indicated to him that I had given in, and would do what he wanted if he let me breathe.’

He then raped her and she said that throughout he was talking to himself, shouting ‘Inshallah’ – which is Arabic for ‘if Allah wills it’. She said: ‘Afterwards he asked me if it was good, and if I had enjoyed it.’

Her voice then broke as she added: ‘I never would have thought something like that could happen to me. I just couldn’t comprehend it. I thought I was going to die.’

PATRIOTS, you know what you have to do.  This site has gifted some “marching orders”, and others can be found within its body of work. Seek and you will find!

OH, as a parting “gift”, this analysis should resonate well with American patriots, yes, it will come in handy!

INDEED, aside from bowing down to pagan moon-god Allah, Americans (westerners) will be forced to submit to the cultural “norms” of Allah’s Muslim Terrorists, that is, if they don’t internalize the immediacy of the barbarians at their gates!!