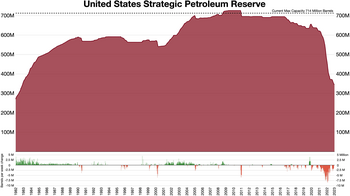 (Barrels in the US Strategic Petroleum Reserve per year since 1977.

The Strategic Petroleum Reserve (SPR) is an emergency stockpile of petroleum …)

AS is said, the PLOT thickens, that is, after the SMOKE clears! Indeed, make no mistake, resting atop all matters in the realm of geo-politics, the governing and intellectual chattering classes will be the ones to decide: Is it time for actual war, or a time to keep the peace? Or, perhaps, a targeted economic upheaval is the preferred option to reset the world order? Even more so, should its precursor be the actual unleashing of a bio-weapon and watch what shakes out, in order to decide the course of action? Inexorably, these (among others) are not only fair (and equitable) questions, but the most significant of all.

BUT if this address is not convincing enough, so be it. Take a listen, a peek, and absorb the below.

Last November, the criminal Biden regime siphoned the SPR for 50,000,000 barrels, a move usually set aside for war, saying his actions would arrest rising gas prices and “put money back in consumers’ pockets.” Motorists, he touted at the time, would see a gradual decrease in pump prices over the next few months.

Instead, the opposite transpired; the median cost of a gallon of gas has increased 47 cents, an aberration not seen since the Carter years. At the time of this writing, the average gallon of gas cost $3.61, with some pumps on the west coast charging nearly double that figure.

In early January, as Omicron coverage still dominated broadcast news, clouding other issues of national importance, the U.S. Navy Judge Advocate General’s Corps received tip-offs from an alleged administration insider who claimed he had intimate knowledge of a conversation between Biden and Emmanuel Macron.

The socialist Macron purportedly told Biden that ‘playing along with the pandemic’ had financially crippled France’s economy. Lockdowns and the intentional bankrupting of many French companies, Macron said, had caused an unanticipated energy pinch, citing the temporary closure of Total, France’s main oil company and one of the largest publicly owned oil and gas companies in the world. Macron said his country didn’t have enough oil and gas to both heat homes and keep cars on the road, despite having “borrowed” tens of millions of barrels from countries such as Spain, Canada, and Germany. So, Biden, after consulting Secretary of Energy Jennifer Granholm, “loaned” Macron 35,000,000 barrels, the tipster claimed.

Our source said JAG at first rejected the tipster’s claims, believing him to be an agent provocateur, as his assertions made little sense, and JAG’s cursory investigation showed no evidence that Total had shuttered operations during the plandemic.

“Everything he said was shaky at best. Total’s stock was steady, something you wouldn’t expect to see if a major energy provider went dark almost two years. Investors would have screamed bloody murder if Total went dark. And as far as the U.S., we blamed the fuel spikes on the administration’s war on domestic energy production,” our source said.

Nonetheless, JAG pursued the investigation “just in case,” he added.

A deep dive into France’s energy sector eventually revealed Total had indeed closed four of its five refineries from January 2020, the start of the plandemic, to December 2021, when much of the world began to reopen. Moreover, Total’s push toward “green energy” had cost the company billions of unrecoverable Euros. Macron, it turned out, had concealed these facts by depleting his country’s petroleum reserves—79 million barrels—throughout the plandemic.

“I can’t say how right now, but we sure learned that Biden did ship to France at least 35m barrels of crude, and possibly much more, an act of treason. We keep those reserves, so we have fuel in time of war. The administration never released it into the U.S. economy, he gave it to France. And knowing he might make such a decision again, we acted to protect our nation’s national interest,” our source said.

On Saturday, February 19, U.S. Special Forces encircled all four locations and, to their surprise, found each site guarded by armed agents of the Federal Emergency Management Agency.

In Bayou Choctaw, FEMA surrendered without firing a shot.

And in Bryan Mound, Special Forces had to hose down 5 FEMA agents that, after being given every opportunity, refused to surrender control of that location’s SPR. One Special Forces operative was wounded, but his injuries are not life-threatening, our source said.

Special Forces also seized the Big Hill SPR, though RRN has not heard whether anyone was wounded in the siege.

“The strategic petroleum reserve is now secure,” our source said.

However, a huge discrepancy exists between the quantity of crude at the SPRs and what should be there, based on the tipster’s report. On paper, the U.S. SPR holds 714,000,000 barrels, but the U.S. military counted only 565,000,000 barrels, an enormous difference suggesting Biden might have given away far more than the tipster claimed.

“There will be an accounting for this treason,” our source said. “We will find out who gave away that oil and who took it.”